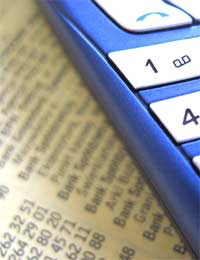 It seemed the strangest thing, opening directory enquiries to competition. But that’s exactly what happened in 2002, when the process was deregulated. Instead of people using the familiar 192 number to find the number they wanted, suddenly consumers were faced with an array of numbers starting with the three digits 118.

The idea was that the new vendors would offer more services and products than had been available previously – although, all people ultimately desired was the phone number they were seeking, and possibly the option to be connected directly to it.

192 was phased out in late August 2003, but the new 118 numbers had become effective the December before. Yes, there was plenty of competition initially, but it was ridiculously confusing for consumers. Instead of a simple three digit number, there was now a maze of companies all offering what was really the same service and all with phone numbers beginning with 118 followed by three more digits. Each advertised and offered different charges, some with a fixed rate, some where users had to pay by the minute.

The general theory was that competition would mean better service and lower rates in finding numbers for consumers. However, initially that wasn’t the case. Regulator Oftel checked 40 different services not long after the market opened to competition, and found pretty dire results. Where there were complaints, only 80% of customers were offered refunds, but more importantly, the correct number was only given 62% at the time.

A year later, Oftel’s successor, Ofcom, found a more mixed situation. Correct phone numbers were now given 87% of the time, a great improvement. On the down side, however, people were using directory enquiries much less than before – figures were down 25%. In terms of spurring competition, most people could only remember one service, the one that had advertised most on TV, and with its 118 118 number the easiest to remember. But it wasn’t the cheapest of the directory enquiry services.

By 2005, things were worse, with the National Audit Office coming out and openly criticising Oftel for having deregulated directory enquiries when there was no need, citing continued confusion on the part of consumers and – most damagingly – the fact that people were actually now paying more for the service.

How it Affects People

The wide range of 118 companies has simply created mayhem for the average person. The costs can range wildly (this is also true for mobile enquiries services), but people are paying more for directory enquiry services than they did prior to deregulation. It’s a service many people now use as a last resort, simply because they can go on the Internet and obtain the numbers they seek free of charge – and often far more quickly than making a call to a 118 service. Then, of course, there’s also that old standby, the phone book, which has become far more thumbed since 2003. According to a survey, 88% of those who use alternatives to 118 services are perfectly happy with the methods they’ve begun using.

118 services certainly have expanded from simply providing a phone number. Many also offer movie listings, can give text back answers to people and even provide answers to some rail enquiries and various classified ad services. At this point, 30 different 118 services control 95% of the market – although most people would be hard pressed to come up with even five different 118 numbers.

What Do You Think?

Do you feel opening directory enquiries to competition brought any real advantage to callers? Do you use the services often? How many 118 services can you name? How do you obtain phone numbers? Do you – or would you – use the value added services from 118 companies?

Making Calls to Mobile Phones
Share Your Story, Join the Discussion or Seek Advice..
Deregulation of the service has only increased prices. There has been no consumer advantage. I regularly used DQ on 192 before de-regulatin. Since DQ was de-regulated I haven't called a 118 number even once.
anon - 8-May-13 @ 10:21 AM
Title:
(never shown)
Firstname:
(never shown)
Surname:
(never shown)
Email:
(never shown)
Nickname:
(shown)
Comment:
Validate: