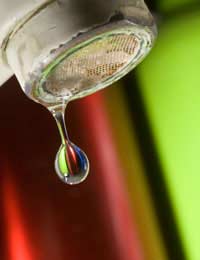 When the water and sewage services were privatised in 1989, as one of a raft of privatisations that the Conservative government had promised when elected a decade earlier, there was a great deal of disquiet about the process. With other high profile privatisations such as gas and electricity, there was some element of choice, in that it is possible, though difficult, to live a modern life without one or the other, or at least with reduced consumption. The privatisation of British Telecom also dealt with something that many people still considered a luxury and could be done without.

But drinking water, essential to life itself, and disposal of effluent, is something that the people of the United Kingdom had come to believe was a right. People were very concerned about it, particularly with the suspicion that the government ramped down investment and maintenance of the largely Victorian sewer system in the run-up to the process.

It seemed wrong to many people that an operation whose prime responsibility was to provide water and sewage to the people of the UK would be turned into one whose prime responsibility was to make profit for shareholders. Opponents of the process imagined executives sitting around boardroom tables and making decisions about whether to spend profits on the rebuilding of an old sewer or giving the money to themselves and shareholders, and it's not hard to guess what opponents thought those decisions might be. The fact that the employee count for the whole industry shrank from 80,000 to 50,000 between 1973 and 1989 didn’t help to calm these fears.

However, privatisation went ahead and the water companies that emerged from the old water authorities carried on running the systems. This only happened in England and Wales, the water boards in Northern Ireland and Scotland were left in public ownership. In England and Wales the companies were now prey to being bought up by foreign competition; many merged together to make themselves larger targets and therefore harder to attack.

Unlike the other privatisations of the Thatcher era, the water and sewage privatisation could not bring in any element of competition. Despite the existence of a regulatory authority authorised to control price rises, OFWAT, water prices increased by over 50% in the first four years of privatisation and 46% in real terms (adjusted for inflation) in the first nine years. This was accompanied by vastly reduced investment on water and sewage treatment plants and the resultant savings spent on dividends to shareholders rather than price cuts to consumers. Pre-tax profits for the ten companies went up by 147% from 1990/1 to 1997/8, so everything happened pretty much as predicted by those opposed to the move in the first place.

In the new century the water companies came under increased fire, but still seemed largely untouchable. The employee count across the industry had dropped further to just over 30,000 by 1991 and disconnections increased. Water companies then started putting non-payers on pre-payment water meters so that disconnections were no longer their responsibility.

With the tendency toward drought in recent years, leakage rates in the water companies' delivery infrastructure and a perceived inability to invest to prepare for drier conditions have also been bones of contention for the public. And now, with increasing numbers of utility companies being targeted by private equity firms, vehicles set up largely to avoid tax and asset strip companies, there aren't many people who believe things will get better.